“We are a dark country! Maybe it’s the climate or whatever, it’s just the state of mind that we have here…”

With its Gothic cover and a welter of dark subject matter (mental illness, broken relationships and death row) Stolen Hearts might be expected to be equally brooding and downbeat but it’s not.

More obviously bluesy fare is provided in the slow, expressive Slowly Burning, the breezy latin-tinged Silver Stones and in the southern-soul-gospel touches of City Of Angels.

Erja has said she devoted a lot of time to her guitar parts, and it was worth it: the renowned Lyytinen slide is there, in the Landrethy gimlet tone and sustain slide of Rocking Chair, the fat-and-furry runs of Lover’s Novels, and the meaty southern-fried interjections of City Of Angels; while the monster solo on Black Ocean sees her cover all the bases (with and without slide) running from stinging Schenkerisms to furious Skynyrdesque lines via Gary Moore emotional lyricism.

The surprise album closer is Broken Eyes, an almost show-tune traditional piano led ballad, complete with haunting slide accents and intricate vocal arrangements. the album’s vocals (laid down in London’s State Of The Ark studio under the direction of Chris Kimsey) are for Erja the best she has done to date: expressive or rocking, playfully seductive or impassioned as required, and with occasional spine-tingling, lush, multi-layered harmonies, the journey was clearly worth the effort. 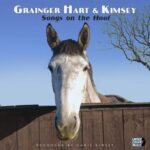